It’s time to pack our bags and get ready for another weekend getaway! This time we’ll be travelling to a place that may seem straight out of a fairytale with its beautiful mansions, old-world forts and pirates! Campeche is the capital and the largest city in the state of Campeche in Mexico. While you won’t find the sparkling beaches and turquoise seas here that you might be familiar with in the Riviera Maya, you are sure to be blown away by the rugged beauty of Mexico’s western coastline of the Yucatan peninsula.

How to get to Campeche 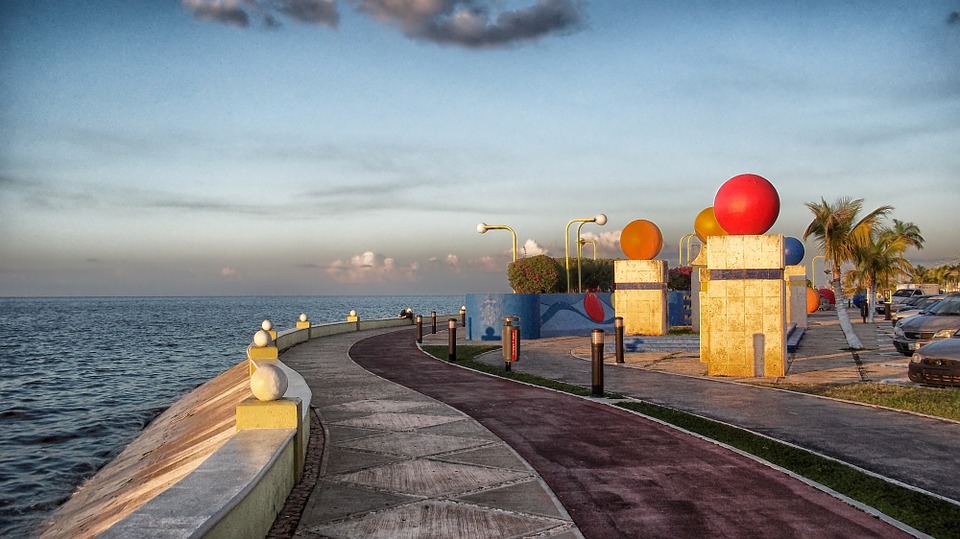 While not home to an international airport Campeche is still surprisingly easy to get to by motor vehicle.

Those with their own cars or rentals will be able to make use of the comfortable highway drive from Cancun (7 hours) or Playa del Carmen (8.5 hours) by following the freeway to Merida where you will route onto Mexico 180 O that will lead you straight to Campeche.

For those who would rather not drive there are daily buses through ADO or OCC from Cancun or Playa del Carmen to Merida where you can transfer to a short 2.5 hour bus straight to Campeche. 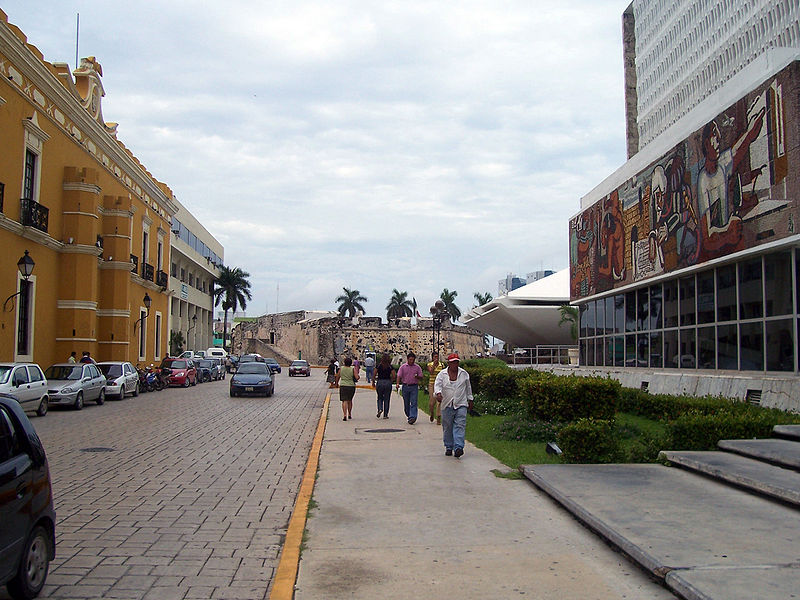 There are a number of quaint and luxurious hotels and rentals in the area, ranging from modern luxury to ex-haciendas. Most hotels are located along the Malecon which runs the entire length of the city, however there are also a few more budget-friendly hotels in the historic center. With the lack of azure beaches in Campeche you will definitely want to ensure that you find a place to stay with a pool.

Campeche is home to some incredible historical sites, which are responsible for its status as a UNESCO World Heritage site. Just wandering the streets of the city will leave you in awe. Within the old town every building has been restored. Rainbow pastel homes line the cobblestone streets and will surely inspire you to have your camera out and ready with every step you take!

In the 17th and 18th centuries, Campeche was a key port in the Caribbean which meant it was a prime spot for pirates – this is the reason for the historic old town’s outer walls and fortifications which acted as protection against the omnipresent attacks. 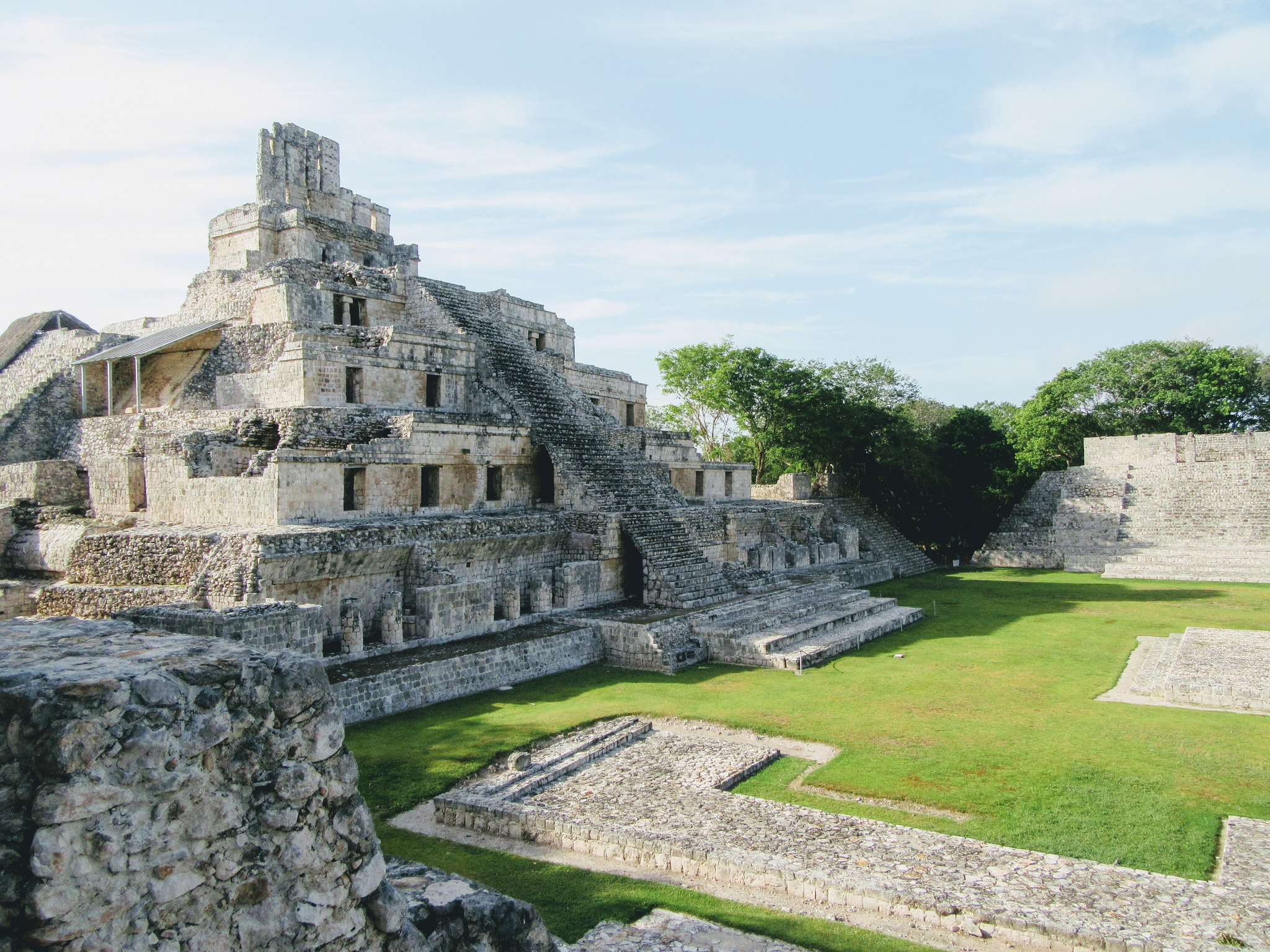 There are also a number of ancient Mayan ruins in the area. Ednza is the closest major site and is about 45 minutes away. They are smaller than many of the other major ruins, but they allow more intimate sightseeing than more popular and larger sites like Chichen-Itza.

You also won’t want to miss the food and drink in Campeche which is known for its seafood. Cazón (shark) is a local delicacy and widely available. There are many small restaurants located around the city, including many in the historic center that range in price. There are also some groceries stores in the city for those on a budget who would prefer to make some meals themselves.

Whatever you decide to do when you’re in Campeche, you’ll want to make sure you bring your walking shoes. There is a lot to see and explore during your exciting weekend away! 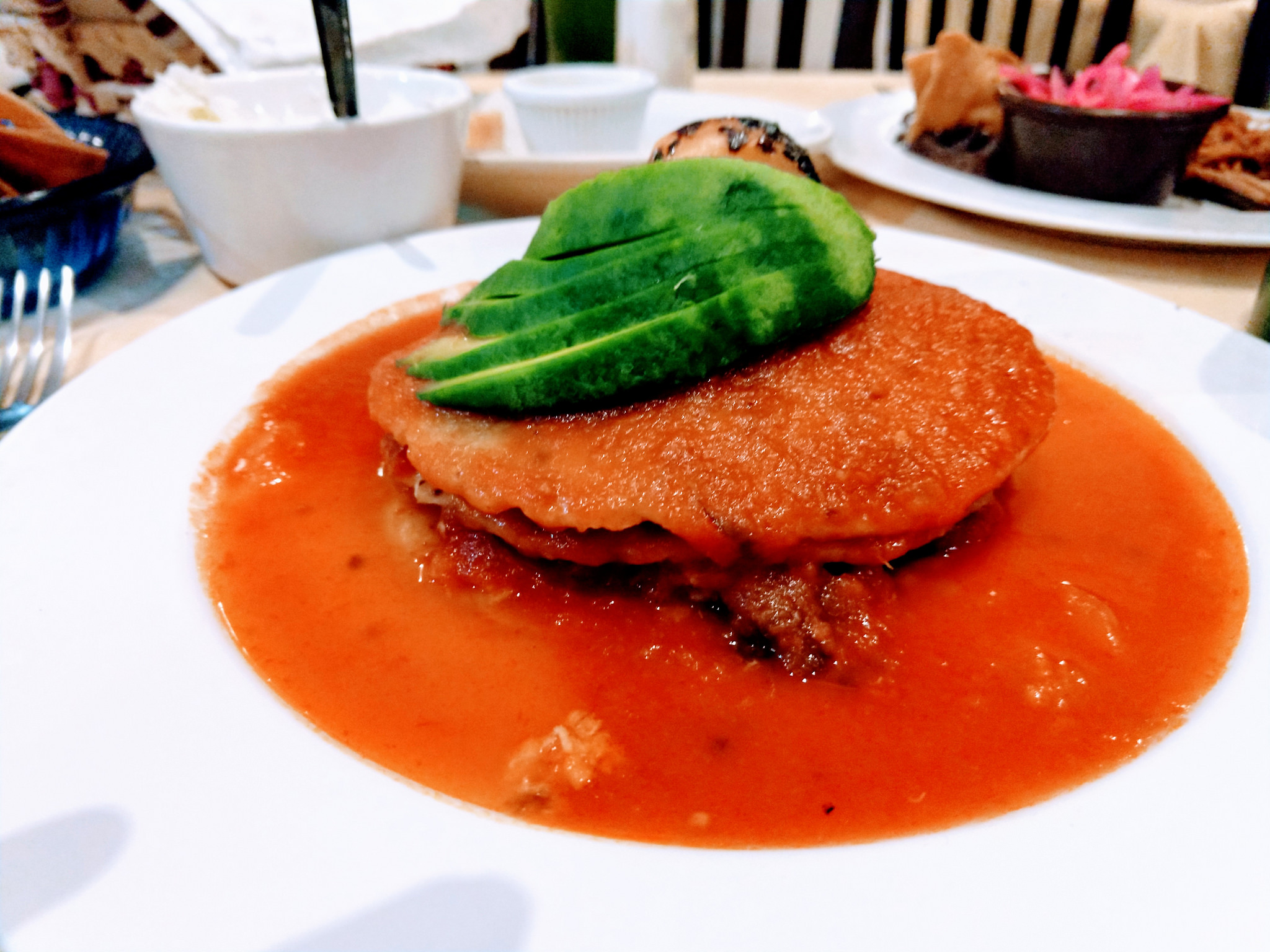 It’s fair to say that this once colonial city offers some amazing gastronomical delicacies. You can find eateries from small cafés to extravagant restaurants and everything in between. Seafood is quite popular with both locals and tourists. Local dishes are plentiful throughout. Try some pan de cazón (shark bread), coconut shrimp, poc chuc, and others.

When it comes to shopping, you’ll be surprised at the many options found in Campeche. You can buy some textiles, clothing, hammocks and more at one of the many artisanal craft shops. Or you find gems, magnets and jewelry inspired by nature. There are, of course, a handful of shopping centers and malls, as well for a more Americanized experience.

Be prepared for a long road trip. Getting to Campeche can take up to 8 hours, so make sure you have plenty of activities if you’re taking the ADO bus, or things to do if you’re driving.

Most of Campeche’s larger places accept credit card. However, it is highly recommended to always carry enough cash around.

Learn some phrases in Spanish. Campeche is far from the English-speaking community in the Riviera Maya. Not many locals speak English like they would in Tulum or Playa del Carmen. That is not to say you won’t find someone who does and is willing to help. But it definitely helps if you can pick up some Spanish beforehand for the best experience possible. 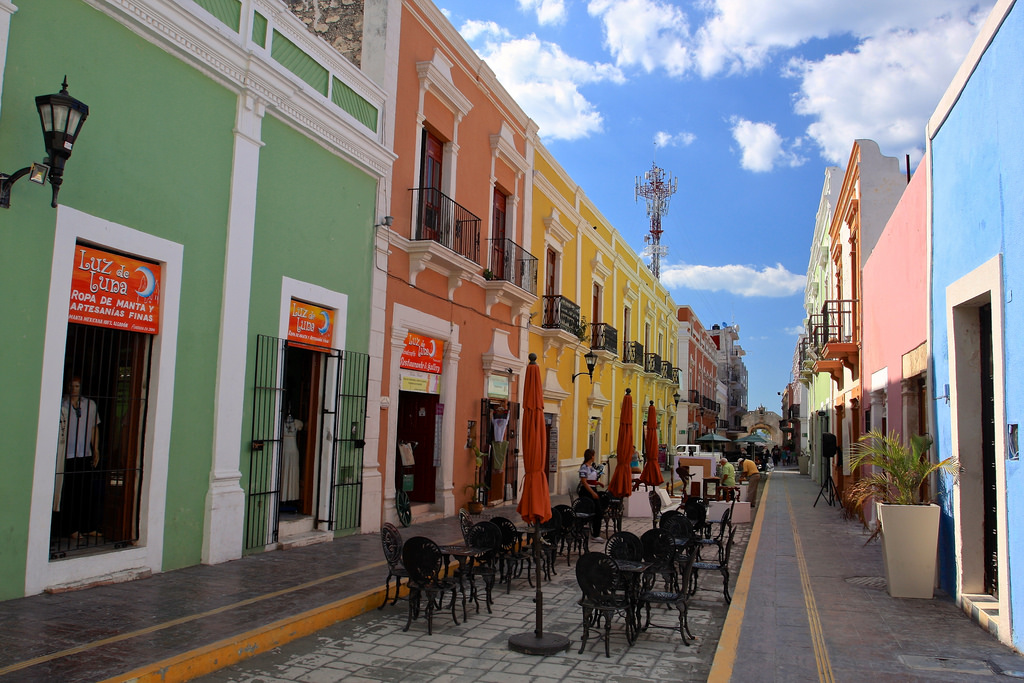 What are you waiting for? Pack your bags. We’re going on a road trip. Enjoy the colonial vibes of Campeche, soak in the culture and engulf the delicious food. When the weekend is over, head back home to your beautiful home in Playa del Carmen. But get pen and paper out. It’s time so start planning next weekend’s getaway!

Campeche is one of those places you might never consider visiting, when thinking of a short trip from the Riviera Maya. However, it is such a charming and romantic destination, you’ll never regret taking the time to go!

This beautiful port city was founded in 1540 and was the most important port of the Peninsula during colonial times, similar in importance to Havana and Cartagena. The area developed to be an important city, and the locals built elegant mansions, impressive churches and the traditional barrios grew around the main square.

During Colonial times, Campeche was a producer of precious woods, natural dyes and the main port for the neighboring Yucatan State. This made it an ideal target for pirates, so the city had to build a wall and fortresses all around in order to protect the population from the constant attacks.

Campeche offers it visitors a beautiful mix of Ancient Mayan cities, nice colonial cobbled roads, and the view of the sea along the malecon (esplanade). There is also a good mix of the old and the new, as you can walk along downtown and feel like you are living in colonial times, and then visit the modern shopping mall or the convention center and enjoy modern amenities.

Campeche is full of charm, with its magnificent colonial mansions, narrow streets and the presence of the colonial life all around the city. Walk along the malecon, visit the forts and the remains of the original wall that surrounded the city, or visit the museum of Colonial times; we are sure you will be amazed.

Campeche has magnificent colonial sights, Edzna is near the city and was an important ceremonial center, with an active trade with other Mayan regions. Calakmul is a large archeological site, located in a National park of the same name, and it also has a museum displaying both the nature and the archeology of the site.

There are many museums in the city and surrounding areas occupying the former bastions of the wall that surrounded the city, so you can pick your favorites or visit every one. The Virgen de la Soledad Bastion has an interesting Mayan Architecture collection, and the San Carlos Bastion holds an interesting history collection.

There is also the San Jose Museum showcasing the pirates, weapons and boats that used to attack the city, as well as other artifacts from colonial times.

Campeche grew during the Spanish rule and formed different neighborhoods, each barrio has a main plaza and a church; and the houses would be built around these plazas. There are five traditional barrios in Campeche: San Francisco, Guadalupe, San Roman, Santa Ana y Santa Lucia.

Each of the churches in Campeche are worth a visit, but the San Francisco Church is the place where the first mass in the continent was held.

Haciendas were the heart of the colonial economy, as Campeche was an important producer of natural dyes, cotton products, honey, wax and salt. Over time Campeche developed big farms, and started producing dry meat, leather goods as well as sisal, the fiber that made the Peninsula one of the wealthiest areas in the world.

There are haciendas all over Campeche, some of them have become hotels, while others are used as tourist attractions. Do not miss Hacienda Blanca Flor now converted into a hotel, and located just in the outskirts of Campeche, the Hacienda Santa Cruz is also well preserved and has an active production of palm that is used to make hats.

Campeche is one of the best destinations in the Yucatan Peninsula, one of those under the radar places that will make you fall in love. It is located about 5 hours away from Cancun, and even less if you depart from other cities in the Riviera Maya.

To get there, you can go via Merida, with possible interesting stops in Valladolid, Chichen Itza, Izamal and obviously Merida. There is also the option to go down the coast and stop in Mahahual and Bacalar, and then cross the Peninsula with a stop in the archeological site of Uxmal.

Do not miss out on this amazing city and its surrounding areas, bring comfortable shoes, your camera and time to enjoy every attraction. Winter is the best month to visit, as the days are cool and there is a constant cold wind from the sea, so the long walks are more tolerable.

Let’s Retire in Mexico aims to be the best source of information about living in Mexico, please let us know if we are missing an important attraction or if you would like to know more about Campeche.