There is plenty of visual evidence regarding Spaon’s influence in the Yucatan Peninsula. Spain conquered and colonized the Yucatan cities in the early 1500s, continuing their reign for the next three centuries. In this final episode of our Yucatan series, we will provide short briefs detailing historical markers from then until now.

Miguel Hidalgo was a Roman Catholic Priest who had had enough. In 1810, he became disgusted with the treatment of the poor that lived in the area. The Spanish government surpressed the Mexican people trying to make a living in their own country. Miguel Hidalgo called upon his fellow countrymen in what was to become Mexico’s most famous speech, The Cry of the Dolores. He organized and lead the revolt against the Spaniards with nearly 90,000 farmers and civilians armed with unconventional weaponry. The well-armed Spanish military eventually stopped them at the Battle of Calederon Bridge. The opposition finally captured Hidalgo and executed him on July 30, 1811.

During the French Revolutionary Wars, Napoleon’s mighty forces finally penetrated Spain and its rule over Mexico. In the meantime, the Yucatecans began to yearn for freedom. The Mexican drive for independence was in full swing after the death of Miguel Hidalgo. Opposing leaders were eventually imprisoned or executed. However, the stride towards freedom was survived by guerilla war tactics, led by Vicente Guerrero. Consequently, it all started to take a toll on Spain’s remaining military presence. The elite and monarchy who relocated to what was known at the time as New Spain began to show support for the rebels and the independence for Mexico. 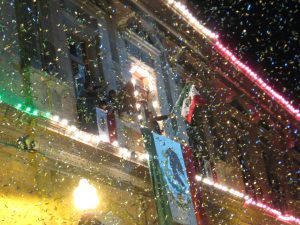 Mexico claimed its independence on September 27, 1821. The country celebrates their independence on September 16, the day of the Cry of Dolores in 1810. The people of Mexico formed the Mexican Empire upon independence. At the time, this included the territory of Belize. However, in 1824 the Monarchy-styled government gave way to the First Mexican Republic. Mexicans had to defend their freedom over financial matters on May 5th, 1862, which is known as Cinco de Mayo. At the Battle of Puebla, against all odds, the Mexican army amazingly defeated a well-trained and equipped French (Empire) army.

Beacuse of this, Mexicans were living in a struggling country, desperatly trying to recover. Spain had torned Mexico from its native roots and thrown into a turmoil by centuries of foreign occupation. After gaining its independence, establishing a government, and rekindling centuries of interrupted traditions takes time. Mexico had to reestablish before entering into a two-year war with the United States in 1846. Mexico finally settled on 31 federated states and is the fifth largest country in the Americas. It is also the 13th largest independent state in the world.

Valuable History in the Yucatan Peninsula

The Yucatan Peninsula holds so much valuable history, along with its ever-important topographic environments. From its dense jungles to arid plains and beautiful coastline that hugs the Caribbean Sea, the Yucatan Peninsula has earned the reputation as a must-visit destination. In the 60s and 70s Mexico started to be an exotic retreat for many of the United States’ rich and famous, which continues today. Unsurprisingly, Mexico’s economy positions part of its financial stability around many elements, tourism being an important one.

When visiting the area, knowing a little bit about the history of the Peninsula and its Mayan ancestry will help you understand its deep rich culture. The Yucatan Peninsula offers plenty of family entertainment that includes exciting adventures, ancient ruins, and world class beaches. Don’t forget to enjoy other such amenities like fabulous cuisines, a festive atmosphere, and warm welcoming from the Mexican people as well.

At Top Mexico Real Estate we have the most fascinating properties throughout the Yucatan Peninsula for you to enjoy the rich history the region offers. Be it new popular areas like Playa del Carmen or old charming places like Merida, we can find your dream home for you.